skip to main | skip to sidebar

"ABIM has Lost its Way"

“ABIM has lost its way.”

-so said Charles Cutler, MD the former Board of Regents of the American College of Physicians.
Now you rarely come across such a glaring comment from someone who has been a shepherd in guiding medicine and medical care.

The monologue started and the ugly facts started to show up on the screen one by one and as time marched on, they got uglier. I will share some of those with you. Oh, before I forget, let me say this was at a debate between the aforementioned Charles Cutler, MD and Richard Baron, MD the President and CEO of ABIM (American Board of Internal Medicine), held by the Pennsylvania Medical Society on December 2, 2014 in Philadelphia. I was there. 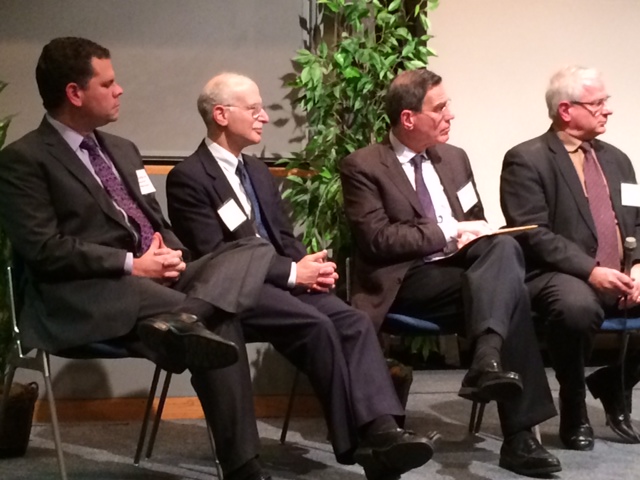 Dr. Baron started his protagonist “Maintenance of Certification” (MOC) viewpoint by visiting the history of medicine and the importance of education, from circa 1600s to the present, trying to tie in the time-honored need for physician education. He mentioned that in the 1980s when it was voluntary almost no one engaged in the process. But then it obviously became involuntary/mandatory through fiat, coercion, forced hospital and insurance buy-in! 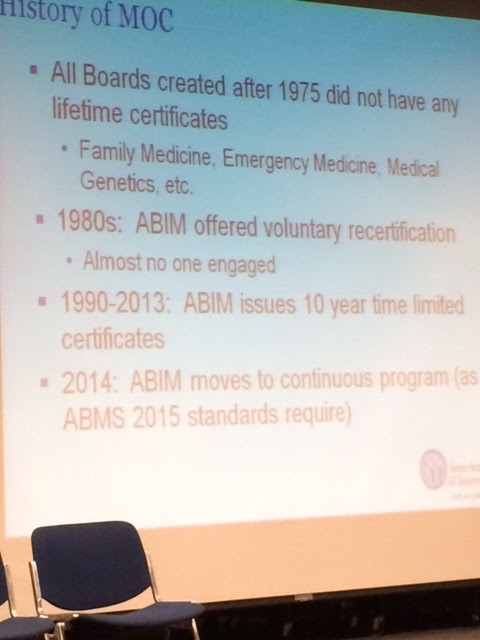 He then cited MOC “studies” that confirmed the need for the MOC-process as a means to improve physician knowledge; namely make physicians better doctors in improving patient care. His fifteen minutes were laced with a mix of “Here is history and thus the need and MOC is the perfect tool.”

Dr. Cutler the antagonist to Dr. Baron’s point of view, started by visiting the revenue stream of the ABIM. 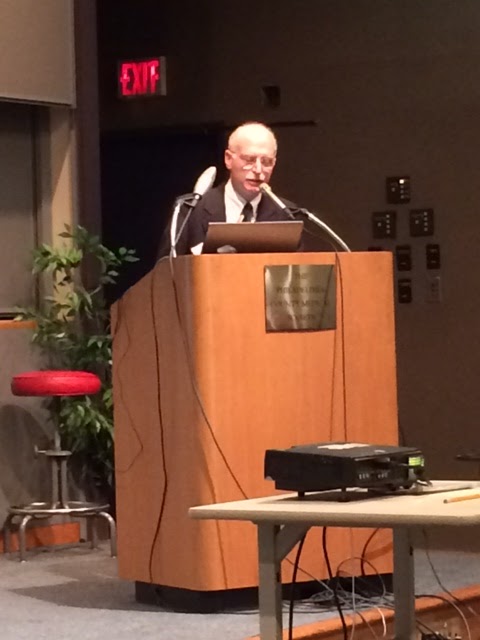 As Dr. Baron watched as his hand slumped on his pad and his eyes gazed at the floor. A lot was going to be revealed, he worried. Dr. Cutler meanwhile quiet and charming always holding a genuine smile on his face,  showed evidence of the ABIM-largess derived from the onerous MOC and showed how it was being used to pay high salaries to the Board of Directors of the ABIM. Dr. Cutler cited extravagant spending by the ABIM (its Foundation) to purchase a $2.3 million town-home in Philadelphia and paid taxes on the town-home annually. 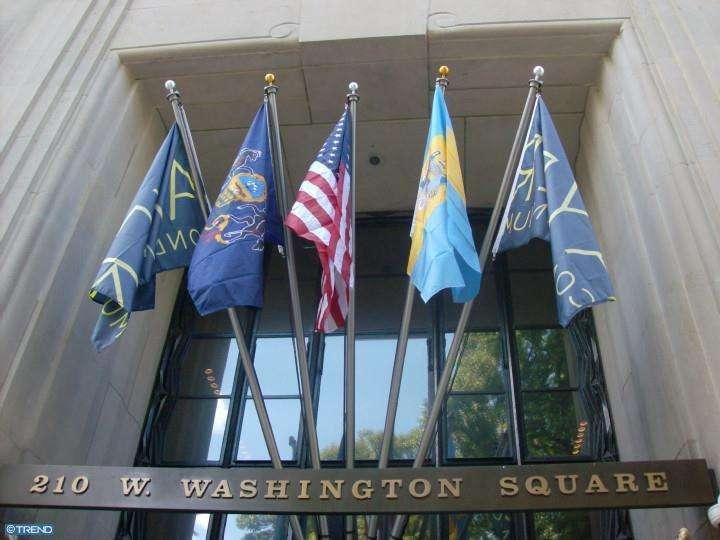 He showed that the Board had meetings that were held at the Four Seasons Hotel, a few blocks away from the ABIM headquarters in Philadelphia with a luxury Mercedes Benz limousine parked in front of the majestic entrance ready to cater to the travel needs of the guests. 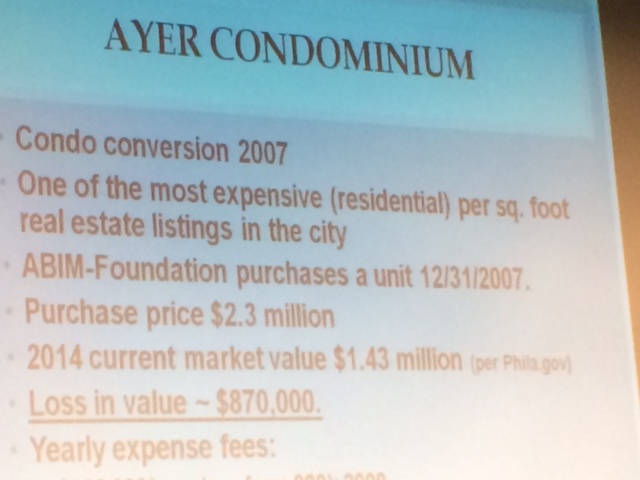 Dr. Cutler revealed the salary of the previous President Christine Cassel, MD and associated other incomes from various agencies totaling $1.2 million a year, much to the growing dismay of the slightly reddened persona of Dr. Baron. 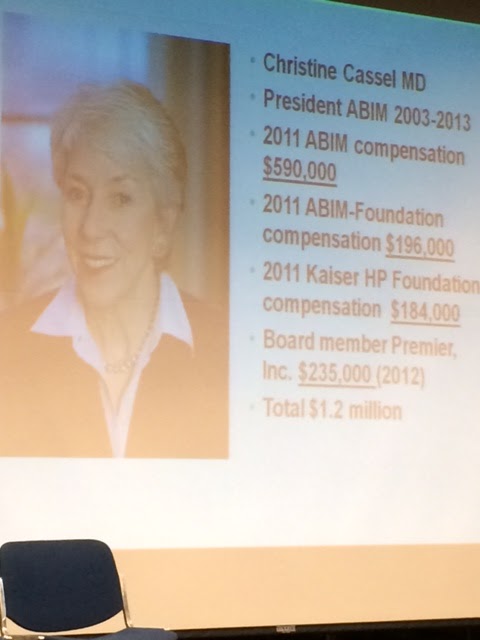 Dr. Cutler also mentioned other non-MD members of the ABIM staff who worked as assistant to the President making salaries in excess of $600,000. 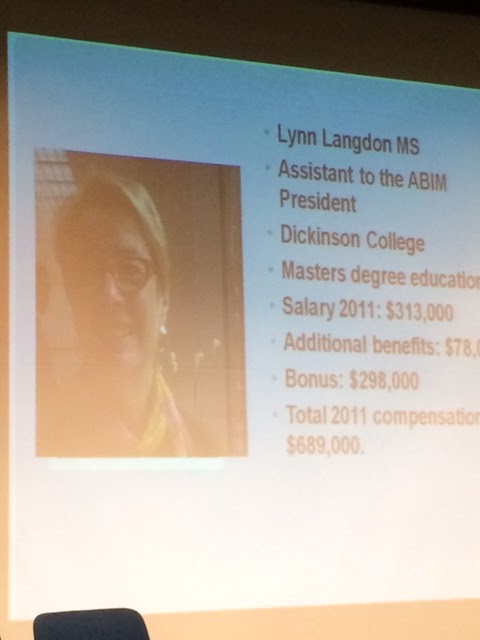 But the dagger in the heart was that there was no real evidentiary proof that the MOC process itself has changed patient care except through tortured articles from the conflicted ABIM authors who had published their articles in journals that, well, kind of are subservient and beholden to the ABIM.

The questions from the audience that followed were mostly directed at Richard Baron, MD the supporter and beneficiary of the MOC process. His answers were mere deflections, usually “rehearsed talking points” and little else. He alluded to the fact that the $2.3 Million Condominium was for sale if anyone was interested, to a muted chuckle from the crowd. But defended his salary by saying that the organization revenues are $60 million a year and to get someone of caliber to head such an enterprise requires high salaries as all such companies need to do, to attract good managers. Huh? ABIM is supposed to be a 501(c)(3) organization and composed mostly of volunteers. Yet in Dr. Baron’s mind the high salaries are justified. He also pointed out that medicine currently is under significant regulatory pressures and physicians are lashing out at ABIM as a consequence, a nuance only a well-oiled bureaucrat can express. On questions about the ABIM’s need for a secure certification examination relating to the need for closed exam instead of an open book examination, Dr. Baron cited the “psychometricians” as the determinants of the rule, stating that when viewed from the “psychometricians” point of view, there was no difference in the outcomes between “open” and “closed” examinations. Further on the topic of making examination questions available to those physicians who need to assess their personal failings, Dr. Baron pointed out that the questions were made by the “psychometricians” and that ABIM had invested 14% of its revenue to craft the questions “ because it is a very difficult process to ask the right question?” was the answer. But there was no response as to ABIM sharing such information. If you are wondering about psychometricians and what they know... What is telling is that the MOC process requires physicians to lay bare their patient records to the ABIM and all other personal information including the number of patients being cared for by the physician, in the era of “transparency” and yet the ABIM itself is quite opaquely mum about their data, financial and otherwise. Sort of a one way street, like the Roach Motel! You spend your time completing MOC (that you should be spending with your patients) and your earned income to get this certification process and then forever (professionally) you are embroiled in the imbroglio that robs you of both on an ongoing annual basis. There are no such determinants of knowledge, capability etc. utilized for lawyers, engineers, manufacturers, technicians or any other profession that bar an individual from pursuing a living without a continuum of recertifications. (Restriction of trade comes to mind). Yet ABIM through its tentacles is attempting to make this MOC, Certification and Recertification process, from which they benefit greatly, a necessity and requirement for the physicians. Failing or not pursuing such an endeavor the physicians would find it difficult to practice medicine.

In the quest for elevating human understanding there are infinite large spaces between information and knowledge and between knowledge and understanding. Information is passing. The Certification examination is chock-full of information gathering that has little basis in the understanding that is required in the art of medical decision making. These gulfs that exist are the exploits that ABIM wishes to undertake, yet it succeeds only in arming the regulatory forces that demean the physician, it succeeds only in arming itself as the body of repute from which flow all recognition and laurels but without foundation and thus it fails in pushing the needle of understanding by even a whisker with all its undertakings. Patients are lost in the equation. Maybe there is a better way? Maybe there is a better pursuit? Maybe there is a better understanding among those that seek to improve it, but so far it is sorely lacking for want of serious intellectual desire.

Interestingly mentioned at the meeting was that 71% of the 780 patients surveyed by one practice had no idea about Board Certification. And equally a survey of 600+ Physicians of varying specialties revealed that 97% thought that the MOC process was a waste of time and resource with no benefit to patient care. There is p-value there somewhere that screams against the null.

Speaking of stats, the Distribution Curve with its two tails clearly focuses on the risks (left tail) and benefits (right tail) of every probability assignment. In the case of MOC sponsored by the ABIM the left tail is fatter than an otter and the right tail is slimmer than a nematode. Skewing doesn't change a thing. Neither does changing the information variable, because the understanding of the knowledge remains a virtue of experience, intuit and wisdom.

The Pennsylvania Medical Society is to be commended for bringing up the subject and presenting it to the rank and file members and visitors. The official video is referenced below.

The frustration on the faces of physicians and bubbling up in every question asked, was palpable, but it did not seem to have any effect on the stony determined face of Richard Baron, MD President and CEO of ABIM.

I guess Dr. Cutler is right about ABIM having lost its way. The question then is, will the ABIM organization under the clutter of new found wealth, plush carpets, regal curtains, regency and gobs of money find its way back?

Only time will tell.

“We have met the enemy and he is us!”
Posted by JediMedicine at 9:28 AM

Those eyes that wander across this digital world and linger over the words contained here in are a testimony to the scholarship and desire to see a point of view. In this age of mediocrity where the antiquity of thought and scope of a future lies hidden beneath unseen shadows, the prevailing winds sometimes stilled and other times gusty will uncover the scale of human endeavor.
Your points of view whether with pride or prejudice will merge to form a collective thought for all to share.
Your comments are appreciated.

By using this site, you allow me to freely reproduce any comments you make.
By using this site, you also understand and agree that nothing on this site constitutes medical advice. Every individual and legal situation is unique and therefore neither posts nor comments are intended to create a doctor/patient or attorney/ client relationship.
The opinions expressed are solely of the author/s. Any educational content is for the express purpose of advancing human thought, where reason resides.

There is ample measure of life's twists and turns that dictate the human life. Medicine has its own.
Here is where you will find some sense of reality and caution!